This place is wicked cool. No, no I can’t say that here. Where to start? These last few days have been some of the most exhilarating of my life. After meeting my group at the airport we went to our hotel in downtown Madrid. Madrid is bustling, the capital, and much different from any city at home. I love Madrid; the architecture, art, streets, sounds, tapas (type of food), and how can I forget the SANGRIA. All these things were new to me and showed me a new and unique side to the world. That being said, I don’t think Madrid would’ve been the best place to study abroad which is why I’m thrilled in my decision to study in Bilbao.

View from inside a “Christmas Tree” in Madrid

We did so much in the four days we were in Madrid that even now it’s tough to remember them all. The first day we visited an absolutely massive and beautiful monastery called “El Escorial”. With a medieval look, inside it’s home to numerous historically important objects. The old king of Spain, Philip, lived there and to call it “huge” would be an immense understatement. Inside, you could walk for over ten miles, see art that would give you chills, and hear the ringing of mass in one of the largest churches there could ever be. Our tour guide was hilarious, and extremely knowledgeable so learning about the history of Spain and the importance of the monastery was very easy. El Escorial was the first real taste of Art that I’ve ever had. Regardless of seeing pictures of famous paintings and other various forms of Art through different outlets, Spain has shown me the effect Art can have on one.

El Escorial was followed by a visit to The Royal Palace, which is somewhat Spain’s version of the White House. However, the Palace blew any comparison to the White House out of the water. Again, it was HUGE and this is where past Kings and Queens lived. Nowadays, it is used for tours and has a whopping 2800 rooms. Each comprised of gold, porcelain, and chandelier’s covered in crystal. We also took a tour of the Museo del Prado, which houses paintings from Rembrandt, El Greco, and many more. It’s seemingly impossible to convey via words the power that each painting inside these museums have. You have to see them, stand next to them, lose yourself in them to come to grips with the purpose each artist had in crafting them. For the first time, Art made me feel something. It gave me chills to think that artists 600 years ago could create masterpieces that could captivate our technology-filled generation, and make us rethink the purpose and enormity that our lives have.

The Royal Palace in Madrid 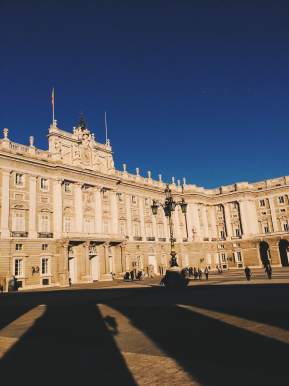 Each night spent in Madrid was one to remember forever, and in the process of being thrown into the awesome nightlife of the city it became in easy way to make friends with everyone in my program. We all share the thirst for something new, and throwing ourselves in possibly uncomfortable situations has become the foundation for our newly found friendships. Leaving Madrid we had about a 6 hour bus ride to our final destination of Bilbao, and on the way we had the privilege of touring the most beautiful city I’ve ever seen: Toledo. Toledo is somewhat of a medieval-looking town, bordered by the Rio Tajo (River). A quick stroll through the city could never be enough, and I hope at some point I can get back to properly spend time there. 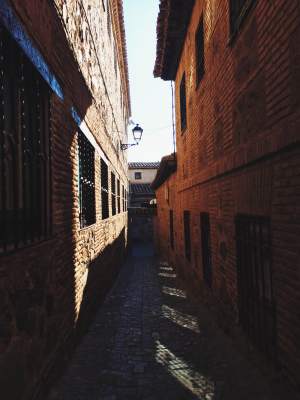 Late last night, we finally arrived in Bilbao! Bilbao will be my home for the next 4 and a half months and immediately stepping off the bus I met my Host Mom. Her name is Maika, and speaks absolutely no English which is great due to the fact that this will help in drastically improving my Spanish. I can’t begin to explain how much I’ve learned in the last 24 hours through one-on-one conversation. She’s hilarious and so nice, but what’s best is her cooking! Here in Spain, food is an integral part of the home and each meal we’ve had is comprised of laughs and learning. She tells me that I’ll be fluido en Espanol by the time I leave and there’s no doubt that this will be the case. She’s made it feel like I’m at home, and being 3500 miles away from Massachusetts this gives me a reassuring feeling in my decision to stay in a home where no English is spoken.

Bilbao, view from outside University 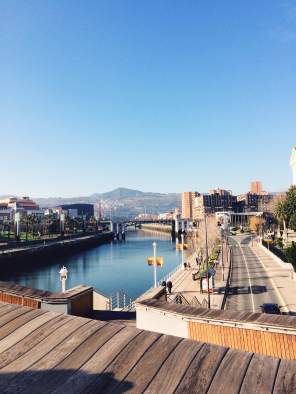 Today we walked around the University here in Bilbao and managed to see a good part of the city. It is lively, filled with plenty of hustle and bustle, but at the same time very relaxing. Bilbao is surrounded by mountains and also less than a half an hour metro ride to beautiful beaches. I guess you could say this place is wicked awesome, oh but on the other hand, no you can’t.